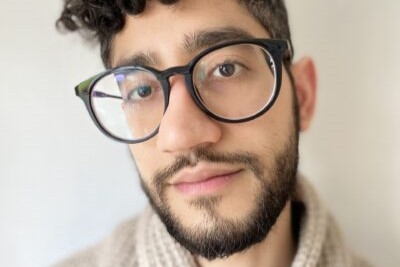 “My mentor Katharine Halls helped me understand my strengths and address my weaknesses, and supported me throughout. She was invested and engaged in my work throughout, and we both gained and learned from each other.”

This programme for emerging translators working in Arabic literature supported four mentees from the UK, Jordan and Egypt. Each translator was paired with an experienced mentor to support them to develop their practice, enhance their awareness of professional opportunities and focus on particular issues or areas of their individual work. The programme was managed by New Writing North with further expertise supplied by our Programme Consultant, Nariman Youssef.

Ali Al-Jamri, entered the programme with a portfolio of fascinating and original work related to Baharna vernacular literature. He also had a strong sense of what he needed to gain from the programme and we could see clearly the potential for him to benefit from our support. We approached the leading translator Katharine Halls, seeing commonalities in their interests and the opportunity for Katharine to support Ali through her meticulous and specialist approach, and were delighted when she accepted the opportunity to mentor him.

The Arabic Translation Mentoring Programme was generously supported by the British Council.

New Writing North supported me as an emerging translator

“When I first applied to the Arabic Translation Mentoring Programme, I was not a very confident translator and only had one published translation to my name. I knew what I wanted to achieve, but had little idea how to approach it. Dialect poetry was what interested me the most, but how do you translate a dialect and its many distinctions from formal Arabic, its cultural references, its unique sound? Am I good enough really to call myself a translator?

By the end of the year, I have an answer to each of these questions personal to me. I have an approach to translation that I believe to be ethical, that is aware of the negative implications of translation and well as its positives. I have an approach to both formal and vernacular Arabic (having moved away from the loaded word dialect in the course of my work), with a toolkit of approaches that have enabled me to be a more confident translator.

A lot of this is down to the fantastic mentoring of Katharine Halls who helped me understand my strengths and address my weaknesses, and supported me throughout. She was invested and engaged in my work throughout, and we both gained and learned from each other. Will Mackie and the New Writing North team have been incredibly supportive throughout, as well as the network we built with mentees and mentors.

By the end of the mentorship, I had edited ArabLit Quarterly: FOLK and published several poem translations (both vernacular and formal) and one prose translation. I have now begun a new translation project with an Arab poet.

In February 2022, I was appointed one the three inaugural Multilingual City Poets of Manchester. The mentorship helped prepare me for this role, which involves translating poetry into Arabic, a new challenge I was up for after a year spent translating from Arabic. It has also helped me develop my passion for celebrating vernacular Arabics, which I am applying in a lot of my work as both a poet and translator.”

“Ali is a talented and ambitious translator and poet with a particular interest in the unique and little-known (at least in English) vernacular literature of the Baharna of Bahrain. Over the course of the mentorship we worked very intensively on a series of texts of Ali’s choice. My sense was that this was very beneficial. Ali has a deep and rich grasp of Arabic, and particularly the dialect of the Baharna, but less experience in decoding texts using scholarly methods, so together we worked on learning and practising the linguistically rigorous translation processes a professional translator needs to follow when preparing a work which will have to be justified and explained to editors and readers.

Particularly towards the end of the mentorship, we also discussed practical strategies for achieving his career aims as a translator and poet, and from recent communication with him it sounds like he’s been pursuing those strategies with some success. I’m very excited to see what the future holds for Ali, and to read his published work!”

Ali Al-Jamri is a poet, editor, translator, and educator in Manchester. He is the editor of Between Two Islands: Poetry by Bahrainis in Britain (No Disclaimers, 2021) and ArabLit Quarterly: FOLK (ArabLit, 2021). His work has been published in ArabLit Quarterly, Poetry Birmingham Literary Journal, Harana, Bahr Magazine, Zindabad Zine, Consilience, Modern Poetry in Translation, and anthologies. He curated the Manchester Poetry Library’s Arabic collection and was a New Writing North Arabic Translation Mentee in 2021. He teaches English at a local secondary. Ali is one of three inaugural Manchester Multilingual City Poets, representing the city’s Arabic-speaking community.